GWAR: An Interview with Michael Bishop aka The Berserker Blóthar 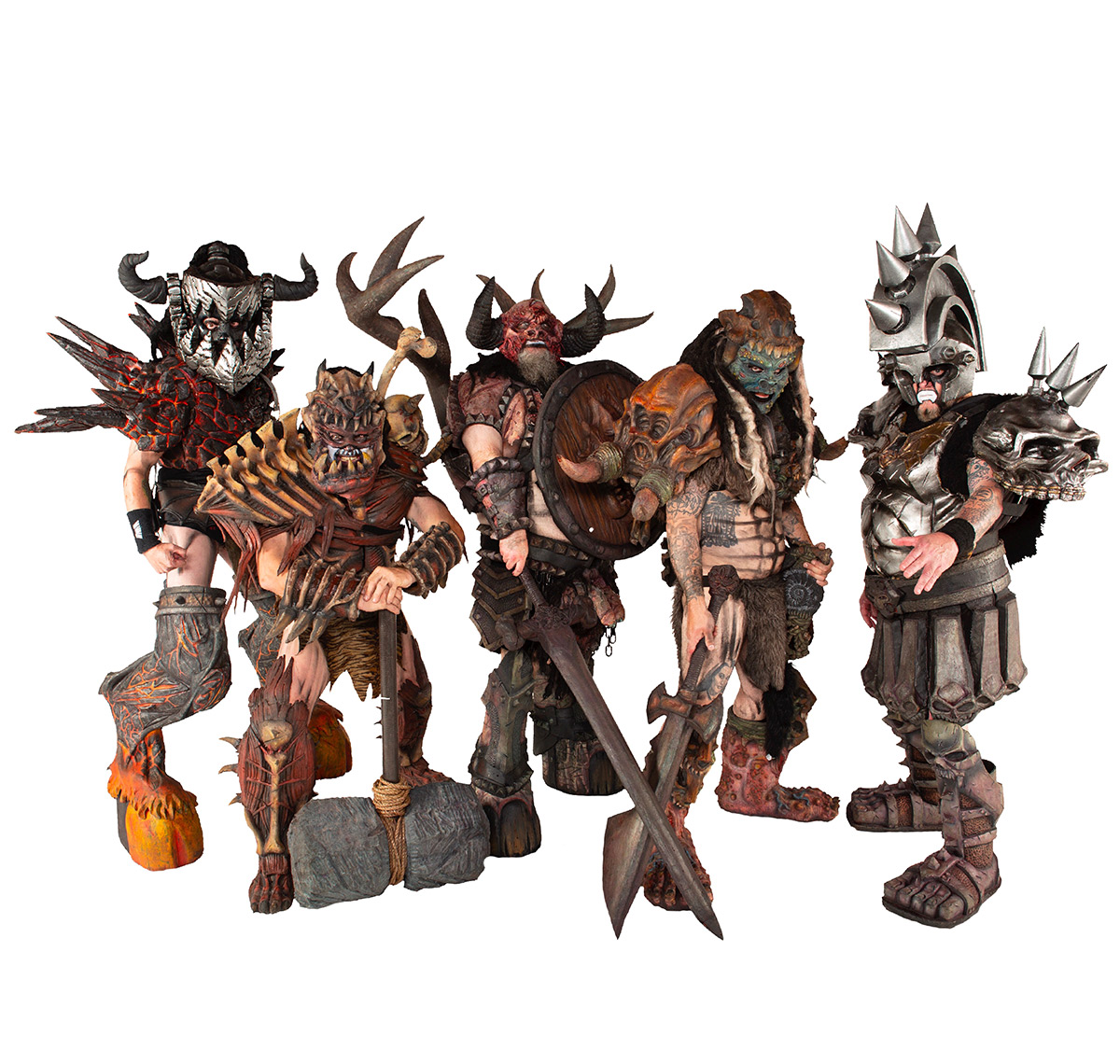 Tonight, Monday November 8th, Gwar returns to Toronto with UK legends Napalm Death for a sold-out show at the Phoenix Concert Theatre, marking the first larger-scale metal show in the city since the start of pandemic. The added bonus is that the tour is in celebration of the 30th Anniversary of Gwar’s 1990 sophomore splatterpiece, Scumdogs of the Universe. I recently had a chance to speak with vocalist Michael Bishop, otherwise known as The Berzerker Blóthar. Bishop played bass on Scumdogs as the original incarnation of the Beefcake The Mighty character, and returned to the band as lead singer after the untimely passing of Dave Brockie aka Oderus Urungus in 2014.

The other exciting news from the world of Gwar is that the band’s ultimate behind-the-scenes documentary, This Is GWAR, has now entered the final editing stages, with a preliminary cut already having been screened for select audiences. For me, Gwar has always been the truest representation of live theatre and practical special effects in all of music, and so a film that takes us deeper into the non-fictional aspects of the band really intrigues me.

“I always knew that the story behind it, is something that people would like to know,” says Bishop.

“This is pretty much that, there’s no silliness to it, there’s no… it’s… it’s kind of a hard watch, man. It’s emotional, this band has been through a lot of trauma. I’ve played in other rock bands that had success and were touring, and Gwar is by far, the most difficult band to be in, in the world. I’m convinced of that. Maybe if you’re trying to do death metal in some Islamic country, (laughs) I’m sure that’s difficult! (But) as far as what you have to do every night to make that show happen, it’s fuckin’ hard! I think this movie is about the commitment that we all made to one another to participate in this kind of art project. It is a co-operative effort at producing musical theatre that involves visual artists, costuming, set design, (and) narratives. As an academic, I taught at the University of Virginia, we’re trained to (be like), if you’re looking at something and you want to understand it, well let’s find other things that are like that. How can you understand the Straight Edge movement? It’s kind of like the Boy Scouts, right! (laughs) With Gwar, I can’t find an analogy, there isn’t one. There isn’t something that Gwar is like, other than musical theatre, but then it’s really not like that because it’s a rock band. It’s unique, man. I’m very happy with the film, I think it does a good job in evoking, and ultimately I think that’s what art is supposed to do. It evokes the sense of Gwar. You definitely learn a lot about what makes this band tick, and really what makes it tick is this very serious artistic and emotional commitment to one another and to the project, and that’s really what that film’s about.”

As the film is being completed, the Scumdogs tour is chugging along nicely, and while Bishop and the rest of the band and crew don’t have as much freedom as they’re used to on this trek, they are back on the road bringing the full Gwar experience to a new generation of fans, many who might be hearing this classic material (and getting hosed with intergalactic fluids) for the first time.

“For us, doing Scumdogs has an almost spiritual feel at times,” he says.

“The songs (don’t) feel dated though, which is great because the crowd really knows these tunes. That’s probably what’s the most moving thing about it. I’ll look out in the crowd, and there’s some 14-year-old girl and she knows every damn word. We’re enjoying it. It’s been a while since we’ve been on the road. Things are very different because of covid. There’s some different procedures around it, and we don’t get to see a lot of old friends just because there’s rules about being backstage and stuff like that. Other than that it’s the same old, same old (laughs), and it’s good to be back out again, and be doing it again. All of that is positive. I always like to see big empty parking lots across the country! (laughs) We immediately head to the worst part of town in every city we show up at and sit around in the parking lot. Probably the biggest difference is that everybody’s on the bus all the time cause of covid. We’re not out, hangin’ around, partying, or anything like that. But it’s going great. The shows are packed, people are loving it. Lot of sell-outs on the tour, it’s great.”

“We were a punk band playing our idea of metal.”

To me, the Gwar of 2021 has a lot in common with the Scumdogs era, because for a time the band focused on more comedy/parody-style songs, and now they have a far more metallic sound. Scumdogs was arguably their first “serious” album musically, featuring their most cohesive lineup up to that point

“(On) Scumdogs, we were really trying to establish ourselves as a metal band, but we didn’t really know how to play metal,” says Bishop with a giggle.

“Brockie tried to kind of pretend like this wasn’t true, but Gwar is a punk band. We were a punk band playing our idea of metal. At the time, bands like Slayer were pretty new, we hadn’t grasped on to that. The way that record was written, (laughs) is the way punk musicians would try to write a Celtic Frost song. By the time we did Hell-O (in 1988), that was a group of musicians that we thought was gonna stick around. But we made the change and we got me, Mike Derks (aka Balsac The Jaws of Death – guitar), and Brad Roberts (aka Jizmak Da Gusha -drums). I was on the first record, and Dave was on the first record, (but) once we got Mike and Brad in the band it really did congeal into what Gwar was. Through the years Gwar definitely has changed a lot musically. It’s weird to play Scumdogs every night. It’s actually a challenge because Dave was a much more varied performer on the earlier records. He was still sort of messing around with a bunch of different voices. Almost like Tom Waits, he’d adopt different characters for different songs. No matter what era, when I’m singing Brockie’s stuff it’s always challenging. He was a very dynamic singer, there’s a lot to his voice. I do my own thing, but I always try to keep that level of variation in the performance.”

Dave Brockie’s presence undeniably hangs heavy over Gwar’s legacy, with Bishop also academically comparing his vocal style to Johnny Rotten of The Sex Pistols. There’s something to be said for Oderus’ image having been synonymous with the band. He was the frontman after all and did the vast majority of the singing. According to Bishop there are some long-time hardcore fans who don’t like the band without Brockie, but he is quick to point out that there are a few fan theories that go way too far.

“It is kinda funny that Brockie died before the Trump era,” he says.

“I never realized how facile Gwar is, so you can assign whatever meaning you want to it. Punk rock’s kind of the same way. Punk rock is a term that can contain Skrewdriver and The Dead Kennedys! Gwar is very similar. You get people that look at this and they are 100% convinced that Brockie would have been a Trump guy, and you hear people say that! You hear people say ‘The band has changed. You guys have changed. You’re different now.’ We’re not! We’re just the fucking same! The world has changed. What people are willing to abide has changed. We have the exact same politics as we’ve always had: murky, confusing, (and) we try to leave room for people to interpret. But I can tell you right now, if Brockie was anything, it was a libertarian with a sort of liberal slant. He most definitely would not have been a fucking Trump supporter! (laughs hysterically)”

“That ability to handle pressure, it’s just something that’s fucking hard to do, and he was Dave Brockie for a long time”

Outside of tributes, the band has barely spoken about Brockie’s tragic passing. In my final question to Bishop I referenced the last interview I did with Brockie, where he stated that he wanted the band to outlive him. I then asked Bishop what he sees as the future of Gwar. For Bishop, making the band more successful means making different decisions than they’ve made in the past. Even if that means doing something different than what Brockie would have done.

“When you have success, you have pressure,” he says seriously.

“The will to accept that pressure, is what drives a lot of people to die, and that’s what Dave did, he died. That’s shit that happens again and again in show business, man. That ability to handle pressure, it’s just something that’s fucking hard to do, and he was Dave Brockie for a long time. It was not easy being that person, and that pressure, I think it took it out of him, man. Gwar having more and more success, (would also mean) more and more pressure. I think that in some ways whether he realized it or not, that Dave took steps to make sure that that didn’t happen. Even though they might have been very subtle. Ultimately, now the band is able to put ourselves in a position where we can be more successful. That’s a challenging thing to say in an interview, because people hear it as being negative but I’m really not, it’s just actually the fucking truth.”

The current Scumdogs tour is, by default, a living tribute to Brockie, as is arguably Gwar itself at this point. In our last interview, Brockie also spoke about how hoped that eventually everyone involved with Gwar would be able to be taken care of by the band, and that it would become even more successful than what it already was. I like to think that’s because he knew that, much like the fabled Cuttlefish of Cthulhu, it was destined to become the biggest of its kind.

“He wanted (the band) to have what they deserve,” says Bishop

“If there’s one thing about this life that we all know is that you don’t get what you fucking deserve. Like, nobody does. (laughs) So a lot of people, the things they get they do not deserve. Dave wanted, and deserved a tremendous amount of success. I think Dave was an incredibly successful guy. We just did an interview that was primarily about him. That’s because he was a huge figure in the lives of a lot of people. By any measure, that’s success. Brockie would have wanted this band to carry on and to do well, and to have success, and for the people that are in it to be happy.”