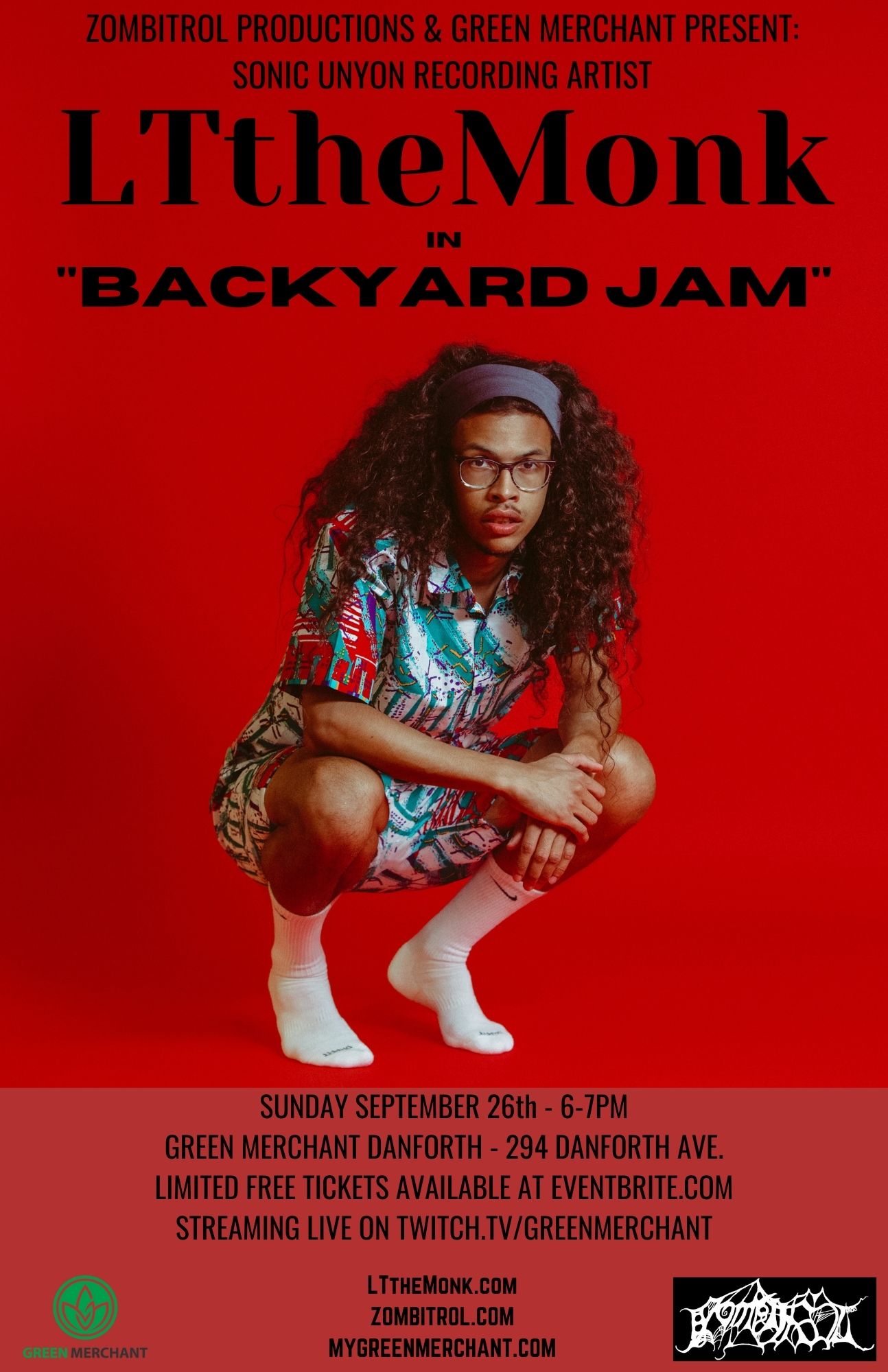 This Sunday, September 26th, Zombitrol Productions and Green Merchant are proud to present the second show in the Backyard Jam series featuring UK rapper LTtheMonk, who’s just released a new album called On The Wall on Sonic Unyon Records. The 26 year-old Hamilton resident hails from the town of Beckenham, in London, which he describes as “a very white middle-class working place,” where he wasn’t directly exposed to music. This comes as a bit of a surprise given the 90s hip-hop vibes on the new album.

“There wasn’t really a lot of contemporary UK hip-hop around me,” says LT, sounding relaxed when I reach him via phone late on a Monday morning.

“Also, it wasn’t like there was much American hip-hop being directly fed to me. So it meant that as I was learning about music, as I was falling in love with hip-hop and all the music that I decided to love, it was really just my own documentary watching and just flicking through the TV channels and being led to 90s hip-hop. It wasn’t like I had stuff at the time that was really drawing me in or informing me. I would listen to Kanye, 50 Cent, and The Game - everyone who was big in the early 2000s. But without having the cultural influences being directly fed to me, it meant that I could go anywhere to find what I really loved, and that led me to the 90s, hip-hop especially. So as I started rapping, and through to when I reached adulthood and became good at rapping, that’s who I was sounding like, that’s who I was testing myself against. Still now what I’ll do is, I’ll finish writing a verse, I’ll play one of the legends from the 90s, whoever I consider to be my favourite lyricist at the time… I’ll play one of their songs and then I’ll rap the verse against it to see if it can hold up to their standards, and then I’ll know that it’s a good verse. So I think that influence is heavily there because of how I grew up into it.”

On The Wall is both groovy and introspective. Emotional and informative. Stand out tracks like “Four Seasons” and “Brothers On The Wall” combine the aggressiveness and passion of Nas with the thoughtfulness of early Common or Mos Def. Then there’s the overall concept of “The Wall.” On the album cover LT appears in front of a restaurant wall of fame, but lyrically the album seems deeper than that. So I was eager to know what this concept means to him.

“For me, it is the wall of fame in whatever your field is,” he says.

When LT started looking for his rapper name around the age of 16, he added the Monk title at first because his friends told him that he would always just sit “looking very chill, very wise” when they would hang out. But on his 18th birthday, his love for a particular iconic 90s hip-hop group would elevate the title for LT, and turn it into something more meaningful.

“The most powerful monk definition that I found is being a monk of hip-hop, because (of) another 90s hip-hop link: I’m a huge fan of Wu-Tang,” he says seriously.

“The day I turned 18, I watched the movie (The 36th Chamber of Shaolin) that inspired their first album 36 Chambers. There were all the Shaolin monks who were learning kung-fu, and then the 36th chamber spread kung-fu into the world. Then I found out that kung-fu means whatever you're dedicated to, as well as being a martial art. I thought, as a monk I am someone who is dedicated to learning every element. There’s hooks, there’s rhyme scene, there’s beat selection, there’s all of it. But also there’s that link of me spreading hip-hop to the world with my music. So I really became a monk in terms of spreading that knowledge.”

LT came to Canada in 2017. Although Canadian hip-hop has been strong for decades, I didn’t view the country as a place that someone would come to in order to further their hip-hop career. LT reminds me far more of the rap that I heard growing up than what I hear today, either from the UK or North America. But it turns out that this uniqueness is what makes him fit into the Canadian music scene, as well as the cultural connections to his homeland.

“I think I’ve just always been looking for a place, (where I have) the freedom of space to find producers, find other musicians who are on the same page as me, and the listeners who actually wanna hear the music. Hamilton, Toronto, they’ve been great spaces where I’ve been able to just come in and say ‘This is who I am, this is the music I make, these are views I have.’ There just so much opportunity to do the open mics, and then organize my own shows, and then open up for other people. I think it’s been great, people wanting to hear new sounds, new perspectives. I think Canada is an interesting mid-point because there’s so much American hip-hop love over here, but then at the same time there’s also so many people, as soon as they hear my accent they’re like ‘Oh yeah! My dad’s English or my grandma’s English,’ and they’ll know about English culture. So it feels nice. There’s a lot of parts that have felt close to English culture, but then also a lot of new North American culture as well. So I’ve enjoyed that midpoint and I’ve enjoyed everyone just welcoming me and the unique stuff that I’m trying to do.”

On The Wall was written approximately between June 2019 and March 2020. In fact LT finished writing the last song just as the pandemic was hitting North America. So any lyrical connection to the pandemic that you may interpret is just a coincidence. Although LT predicts that his future music may reflect his life during the pandemic, he says that he doesn’t have any plans to address covid directly.

“I think there are more eternal concepts that I wanna focus on,” he says thoughfully.

“There’s been a lot of dark stuff that’s happened in my life and with my loved ones over covid. I think just because it’s ultimately, hopefully, a temporary situation. Just like the whole world got over Spanish flu in the last century, and the world has moved through various things. There are still the eternal concepts like love, and poverty, and oppression, and success and all of that. So I don’t think I’ll have 50 punchlines about social distancing, or all the bars about how I’ve been living in quarantine. It will still be the bigger life concepts.”

LTtheMonk plays the next Zombitrol/Green Merchant Backyard Jam this Sunday, September 26th from 6-7pm. Tickets are sold out, but you can stream it for free on the Green Merchant Twitch Channel. You can listen to On The Wall on Spotify, and you can watch the video for “Four Seasons” below.