Zombitrol At Home: Rody Walker of Protest The Hero

By the mid-2000s, Protest The Hero had already gained a pretty serious following in Canada. It was a time when the underground heavy music scene couldn’t have been more divided. On the one side there were the old-school headbangers and the new crop of extreme metal-worshipping youngsters. On the other side were the metalcore kids, and despite their music having all the trappings of extreme metal, most of it was dismissed as somehow being too soft. Sure, the overly-saccharine screamo subgenre was a part of it, but bands like Despised Icon, The Red Chord, and their progressive cousins Between The Buried and Me were as heavy as any tech-death god. It was these bands who would eventually bridge the gap between the scenes.

Protest The Hero had a more hardcore punk take on the genre, with liberal doses of classic metal guitar and prog melodies, punctuated by vocalist Rody Walker’s operatic tremulo. It was their second album, 2008’s Fortress, that began to shift the band from metalcore scene darlings, to international headliners. It also arguably remains the heaviest album ever to hit Number One on the Canadian charts. Speaking to Walker from his home, he holds nothing back in describing the main drawback of that album’s success.

“A lot of people started listening to us on Fortress, and (the same people) are often very disappointed by the rest of our output because nothing we’ve done has been quite as Metallica as what we did on that second record,” says Walker laughing.

“When we write stuff I’m always kind of baffled when people harken back to Fortress, and reference it as like the most metallic thing. I think that Fortress was a lot of people’s first experience with us. First impressions are everything, and you never get to have that first impression again. So when people enjoyed that record, which I do appreciate, they find it hard to have that same experience again. It’s like heroin, you’re chasing the purple dragon and you never quite capture it again! (laughs) I think the evolution of our band has been really natural, and somewhat obvious. I think that’s also where some of the divide is. We sort of left the metalcore behind in my opinion, moved in a more progressive way for (2011’s) Scurrilous. But nothing that we’ve ever done is an extreme departure, and I don’t think there’s a crazy amount of diversity amongst our album catalogue.”

Putting out an album has now become a tough business decision to make these days. The band has just released Palimpest, their first full-length in seven years. It’s a sprawling historical epic that tackles various events in U.S. history, while giving you the most advanced version of their sound that they’ve ever produced.

“Releasing under quarantine is not ideal, people don’t really have money to spend,” says Walker.

“(It) will impact the release of this record and ultimately the amount of money we make. We had a discussion, we sat down and went ‘Do we care? How much do we care?’ We didn’t start this band for money, and as much as it is our career and our job, it’s gonna be fine! We are fortunate that we are not so reliant on touring to pay for our lives. So we just put the record out and bit the bullet.” 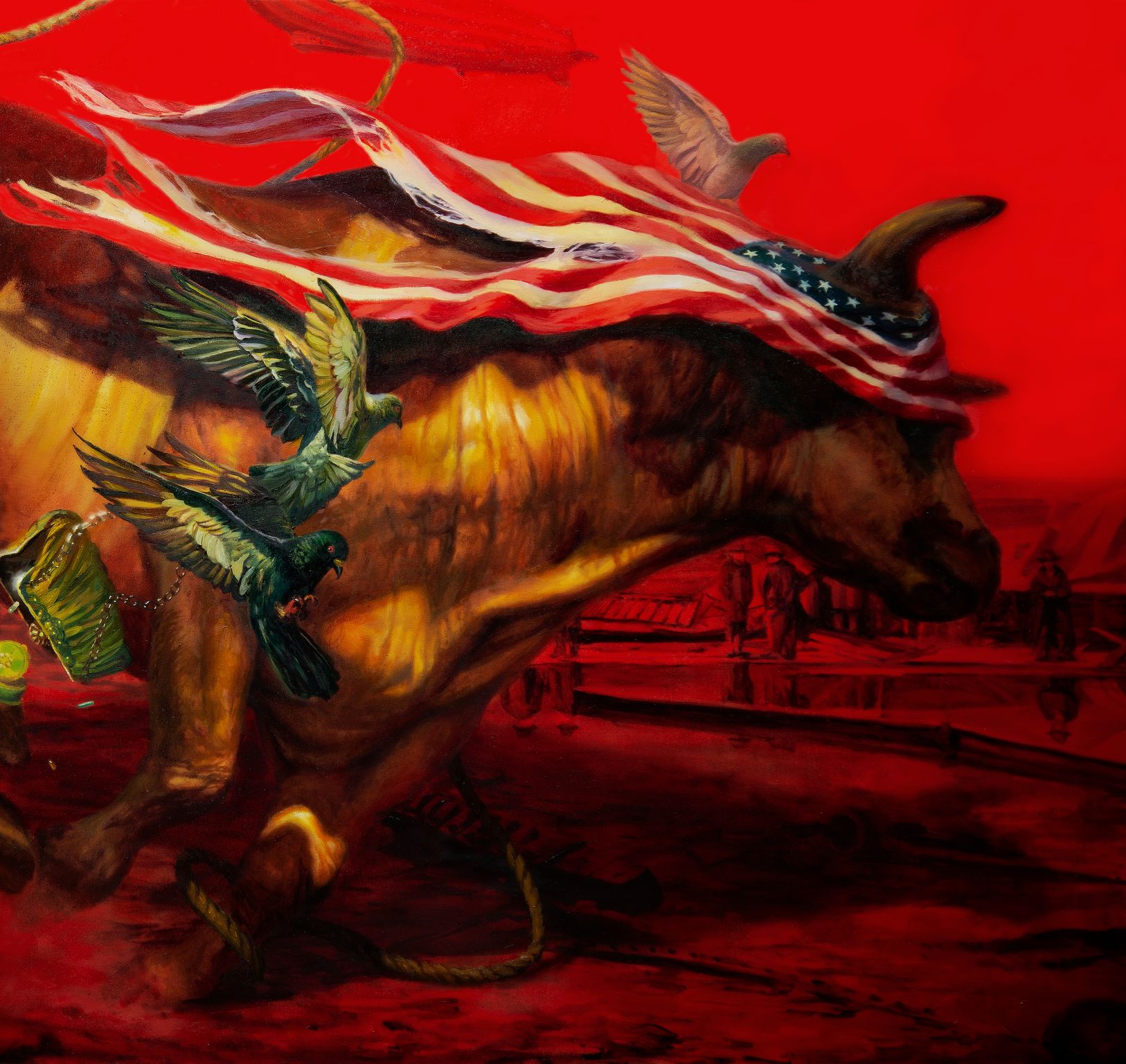 Most of the press related to the album has been regarding Walker’s lyrics on Palimpest, which were written in the wake of the 2016 U.S. election. While most of Walker’s lyrics have been personal in nature, this album finds him looking outward for the first time, and in my view it’s the most direct writing that he’s ever done.

“I know we’ve certainly had… (chuckles) lyricism that was more flowery and artsy, but I’ve always done my best to have people know what I’m talking about,” he says cautiously.

“(2013’s) Volition (had) a lot of that and some people were really not fond of just how specific I was. I know we’re not the first ever to do that ‘cause there’s a whole history of punk rock artists doing it. Punk rock has a long history of (people) saying exactly what they mean. That’s something about that genre specifically that I have always appreciated, like there’s no bullshit, and you see other artists who haven’t explored it before (who) are exploring it now.”

A big part of the recent press coverage has centered around a statement Walker made in another interview when he was asked if the new lyrics will alienate fans who don’t “align with (the band) politically and socially.” Although his answer specifically addressed the “super right-wing, alternative conservative element,” subsequent headlines have misconstrued his response as saying that anyone with any kind of conservative values shouldn’t listen to their music. It was a strange question to begin with, as Protest always seemed to have one of the more diverse audiences in heavy music.

“Obviously I’m not saying that anyone who votes conservative (shouldn’t be) listening to my music, I’m talking about the alt-right,” he says with some frustration.

I mention to Walker that I think it's in part due to this diversity, that I have at times witnessed what I termed as “incidents of privilege” at Protest shows in the past; white audience members singling out people-of-colour in some way. For instance I remember seeing a drunk white fan walk up behind a black man with an afro, and begin petting his hair like he would an animal.

“We have a platform to sort of promote that idea as well so people who listen to our music can also maybe look inward and try find their own moments of prejudice and privilege. The first step in order to expel your own privilege and prejudice is to fuckin’ acknowledge it. I think now is a really good time to fuckin’ do that, for all white people. “

Palimpest is also the first album for the band since Walker blew out his voice in 2018 on the tour for the 10th anniversary of Fortress. Recovery required a period where he couldn’t speak at all, and it forced Walker to prepare for the worst and confront the fact that he probably couldn’t continue with the band if the treatment didn’t work.

“It was about a week where I didn’t speak and I was on (anti-inflammatory medication) Prednisone,” he says with a note of self-consciousness.

“What choice do you have than to just like, go inward and wrap yourself in balls of anxiety? I got to a point where ‘If this doesn’t work, why would I continue to try and just ultimately injure myself?’ Thinking about singing a little lullaby to my son, or just speaking to my family… why would I jeopardize my actual speaking voice, cause that’s fuckin’ insane! (chuckling) Y’know you’re taking away one of your senses to be in an…. underground metal band! (bursts out laughing) I spent that week very much, sort of… fuckin’ panicking! But it is what it is. I found a way to get myself back and healthy in a way that doesn’t hurt. I worked my buns to the bone to get this (new album) sung.”

Walker has always been fun to talk to, as his penchant for serious topics is offset by his near-constant, often self-deprecating sense of humour. It’s amazing to see how family and fatherhood have become essential parts of his personality. He’s been spending his quarantine at home where he’s settled into a routine that includes lots of time hanging out with his 2-year-old son. Fortunately for Walker he hasn’t had to perform any homeschool duties yet.

“If I had to teach him anything other than dinosaur names I think I’d be fucked!” he exclaims.

“I’m scrolling through Facebook and y’know how they have those tricky math questions that people post like ‘Oh, post the answer in the fuckin’ comments!’ I try to do those every day and then I look in the comments and someone will have the same answer that I came up with and it’s always the wrong answer! But my quarantine life is pretty simple. I wake up with my boy every morning, and we goof around, eat breakfast then we head over to my parents’ house. My mom takes him for a walk and I lift weights with my dad. Just drinking a lot of booze and raising the next generation in isolation, and I often wonder and worry about the psychological damage that this will do to our children!” (laughs)

Protest The Hero were children themselves when they started the band. Between becoming a father, his vocal recovery, and spending a ton of time at home, the last couple of years have got Walker thinking about the early days of the band, and just how much pressure was on them at a very young age. As consumers we don’t always consider the effect that public attention can have on a young person, and how the desire to meet the expectations of others can eclipse their own well-being.

“When we were comin’ up we were young kids, and people were like flabbergasted by what we were doing,” he says.

“But with time as we’ve grown older and our skills have sort of, rounded at the edges, maybe I don’t see us being as successful as some other people might have viewed us. It’s really based on other people’s expectations, which is a really awful way to value or devalue yourself. Reflecting on what things were and what things could have been, I don’t know, sometimes when I look at it I feel as though we didn’t quite live up to our potential. But other times I look at it and I think ‘The sky’s the limit, we’re not fuckin’ done.’”

You can get your own copy of Palimpest in a whole bunch of different formats (including tie-dye cassette) here, and you can stream the full album below.