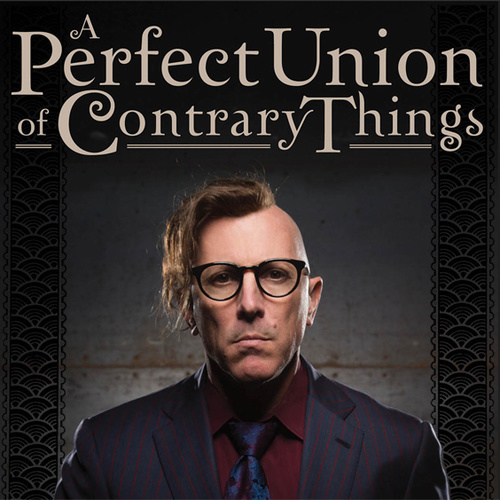 The Tool frontman talks about his Canadian connection and his new biography ahead of his Toronto appearance with Alan Cross.

Alternative rock icon Maynard James Keenan (vocalist for Tool, A Perfect Circle, and Puscifer) has just kicked off the book tour for his new authorized biography A Perfect Union of Contrary Things. This includes a stop at Toronto’s Convocation Hall for a sit down with Alan Cross on November 14th. In anticipation of his return to Canada, I thought it would be appropriate to speak to Keenan about his past experiences north of the border. I also wanted to know how he felt about confronting his audience up close on the book tour after cultivating a such a mysterious image through his music.

“I get the mystery part a little bit in terms of me never explaining what the songs were about” he says.

“But as far as being out there and talking, I’ve been talking pretty much the whole time, storytelling. That’s kind of your job, as the entertainer, as the lyricist, as a winemaker, as a chef, you’re the storyteller. You’re out there. I think making people have to decide things for themselves I guess would be perceived as a mystery, so we’re not really giving anything away with a story like this. This is just a story and it’s not the whole story. Those stories are in the songs, those stories are in the wine, they’re out there.”

To Keenan, it seems that the story is out there regardless of whether its meaning is perceived by one person or millions. I point out that this book may now be the most direct way for people to begin to understand where his art comes from. “Some of this is a map and it has to do with intuition, and listening to it” he says with a calm and sincere tone.

“I think the purpose of it from the beginning has been kind of a life journey. If you were forced to read The Iliad and The Odyssey in school then you get the heroes’ journey. You understand that there’s different phases and there’s an arc. So these stories will probably resonate with people who want to hear it at this particular moment. If you wanna focus on the older things, that’s fine. Those things are there for you. But other people are on a journey, and there’s things that resonate with them at different parts of their lives that they can build on. There are conscious people and there are unconscious people I think. You do your best to lift people up, but at some point you just have to... you know, there are people from your childhood (that) I’m sure you don’t speak to anymore. You couldn’t quite get on the same page as them. You can show them things and you can do the whole ‘lead a horse to water,’ but until they’re ready to drink on their own... just make sure that the water’s available, basically.”

In terms of conscious people, Keenan counts many Canadians amongst their number. “There’s a definite connection between physical activity and oxygen to the brain, and then your ability to kind of solve puzzles and do things, and be aware, and conscious, and present” he says when asked about his travels across the country.

“Having grown up in Michigan I’m basically Canada’s little snot-nosed brother. We’re snow-shovelers. You can’t get where you’re going without getting the snow out of the way, or cutting the wood to heat the cabin. I think in general the people that I’ve met in Canada, just because they’re snow-shovelers they’re breeding more and they have more oxygen in their brain. So I found that travelling through Canada, there’s a nice resonance. People get what you’re saying.”

One stop on Keenan’s journey that stood out to me was Tool’s appearance in Toronto a week after the events of 9/11. That night he encouraged the crowd to take their hate and anger and focus them into positive action. It sounds like a simple idea until you hear how Keenan vigorously approaches it. “You’ve heard the cliché, ‘if life gives you lemons, make lemonade?’” he asks.

“I’m the kind of guy that goes, ‘well if life gives you lemons, take some of that and make some limoncello, take a couple of lemons and plant more lemon trees, open up a farm, create an entire industry out of your lemon tree. Don’t kill your chicken and eat it, have the chicken lay eggs because then you have something to eat tomorrow.’”

“There is that perception that when you’re in an isolated area where you don’t see a lot of culture coming through, of course your opinions, and your attitude, and the way that you go about your day-to-day business is gonna be different than a person living in a larger city who sees lots of culture coming through. In ways you become tuned to that other culture, it opens up your mind to other ideas. You tend to compromise a little bit more, but in a good way, you just coexist with different ideas. The dark side of living in the middle of nowhere is that you can be close-minded because you haven’t been exposed to anything. The bright side of that is that you get to focus on a particular activity without anybody corrupting your process. So there’s some ups and downs. Those differences between the big city and rural I think are more glaring than Canada vs. U.S. Today’s modernization, there’s mini-malls and there’s malls, there’s fast food joints and there’s fine dining, you know they’re everywhere.”

It’s keeping people on the bright side that Keenan seems concerned with. The new book brings him closer to his audience than ever before. Perhaps for those who need a push, Keenan wants his story to be a motivational one. “I’m hoping that this book will just basically be a chronicle of decisions, and those repercussions, and then the choices that follow. The gist and thrust is that you’ll land on your feet at some point. If you fall, get up, keep going. No decision is a bad decision.”

You can grab tickets for Maynard James Keenan’s conversation with Alan Cross in Toronto here.